Helen Arntsen
Man is an episode of Series 2.

M's tummy is rumbling. He eats the ground. A drops in, as well as an apple, which M eats. N comes by.

A gingerbread man appears. The man runs away and M and A chase him, while N refuses. They bump into T.

A flying mat appears to chase the gingerbread man. M eats the mat, and they all fall down. P pops in.

A map appears. M, A, and P hold it like a parachute to descend to the ground slowly. The Alphablocks use the map to see where the man went. M eats the map, when is warned to stop eating everything. The gingerbread man gets N to chase him, and he still refuses. The other Alphablocks tip-toe to the man. M comes to it. He licks his lips, but he suddenly promises not to eat anymore. He tags the man, who starts chasing, M, A, and N.

N refuses to chase the man.

WE’RE SINGING AS WE’RE FALLING, WHILE SOME ARE C- whatever. 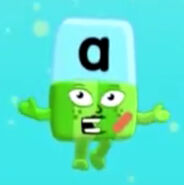 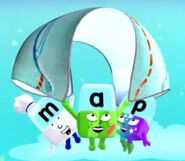 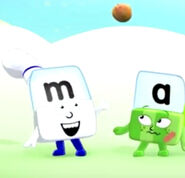 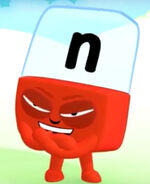