This page lists all major or minor objects that appeared in the Numberblocks series. They are listed in alphabetical order.

Array Displays are objects that first appeared in Twelve.

Below shows the Numberblocks with array displays. Numbers in blue are highly composite numbers, i.e. they have more divisors than any smaller Numberblock. 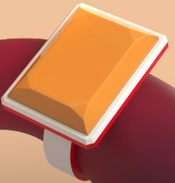 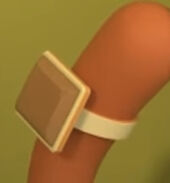 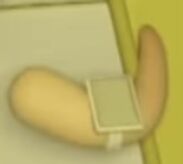 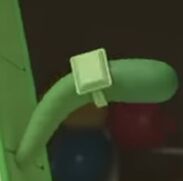 The Binary Boosters are an invention introduced by Sixty-Four. It uses the power of doubles to send any number flying.

Block Cakes are food in Numberland. They consists on small square-shaped cakes with a cherry on top.

About Time
The Clock is an object in Numberland. It makes its debut in About Time.

The Day and Night Signs are objects in Numberland that Twenty-Four holds up when she says "I could do this all day and all night." These represent the 12 hours a day and 12 hours a night.

This wasn't really made clear but it seems that it is located in 24's pockets assuming from when she pulls it from behind her back.

Dice are objects in Numberland, they are mostly used by Six and Sixty. 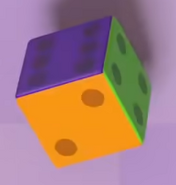 "The special game dice", like the standard dice but each side is colored according to the corresponding Numberblock 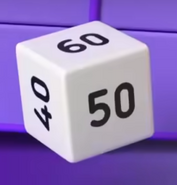 Eggs are objects in Numberland. They also appear on the Numberblocks Channel on YouTube for Easter 2021. 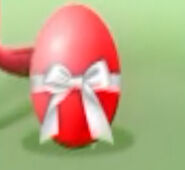 The Golden Infinity is an object in Numberblocks. It first appeared in Heist.

The Golden Infinity is exactly what the description implies, an infinity symbol (∞) made of gold. It appears to be a very valuable object, explaining why many robot guards are protecting it.

100 Ways to Leave the Planet
The Magic Mirror is an object constantly appearing throughout Numberblocks. If Numberblocks move sideways in front of the mirror, a copy of them is made by the mirror.

times when the phrase '

is any number. This is only shown in Mirror, Mirror and More To Explore.

The Numberballoons are balloons owned by the Numberblocks.

The Numberballoons appear to be balloons that come only in the Numberblocks' colours. Interestingly, they have numbers on them, which look like their Numberlings. However, in Step Squads, Fifteen's balloons are coloured in One to Five's colours, and have no number on them. Same thing for the episode "Sixteen".

The Numberblocks with their Numberballoons in "The Three Threes". Note that Seven is not holding his string.

Rubber Snakes are objects in Numberland.

Skill Sheets are pieces of paper (or cardboard, as they have never been seen to bend) that tells the Numberblocks what they can do, including what shapes they can make and what smaller numbers they can split up to.

What's My Number?
Teddy is One's toy stuffed bear and an object in Numberblocks.

Teddy has brown felt, a muzzle with a dark brown nose and one button eye. It has 2 stubby arms and legs, with light pink feet, as well as 2 brown and pink ears.