Numberblocks Wiki
Register
Don't have an account?
Sign In
Advertisement
in: Alphablocks Episodes, Gadsby episodes, Where’s A?,
and 2 more

Ink is the 25th episode of Alphablocks Series 3.

I approaches N and K. She shouts, "It is I!", startling them. K kicks his football too high, and it bumps into each one's heads.

A bottle of ink appears. The ink appears to be invisible. They step in the ink and turn invisible! Meanwhile, D, O, LL, and S are playing with dolls. S holds hands with the invisible I, N, and K.

D, O, LL, and S find themselves in a sink. S has been washed. Then, T plays tea with Doll T. S flys and tells T something strange is happening.

Everything starts to smell! H runs and sticks with T.

Think, think, think... TH sees a knocked-down bottle of invisible ink. P pops in the puddle and becomes invisible. S sends for the others. T and H become invisible, too. P pops next to I, N, and K.

I, N, and K turn pink! P pops away, while invisible SH and R arrive.

I, N, and K shrink! They run away. They bump into Doll D and Doll R.

They take a drink. I, N, and K get their colors back. Then I holds hands with Doll B and Doll G.

I, N, and K grow back to normal, but the dolls become too big!

I guess certain word magic only works on non-invisible Alphablocks. 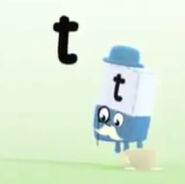