Reason: those who fail to learn from history are doomed to repeat it

I is the ninth letter in the Alphablock gang.

I is voiced by Teresa Gallagher.

I is a fuchsia block with rosy cheeks and long lashes.

I is self-absorbed and thinks she is the most important letter of all. She even likes to sing, even if it's not wanted or needed, but although her singing is loud or something, the Alphablocks love it.

I literally screeching “/i:/” at a dog in Dog 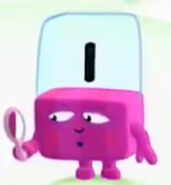 Capital I, as seen in Mine