Fourteen, or 14, is a Numberblock made of 14 blocks. He is voiced by David Holt.

He is a double-lucky skateboarder who often records his skating tricks.

Fourteen is made of 10 white blocks and 4 lime green blocks. His eyes and limbs are a bright green. His eyebrows are rainbow-colored, referencing his status as a double Seven. He wears a dark green helmet with neon green stripes.

He is often seen carrying around a rainbow-striped skateboard with red wheels that has the ability to split into two halves.

Naturally extroverted and athletic, Fourteen is a double-lucky skateboarder. His attitude matches that of a stereotypical teenager, often diving head-first into rebellious and chaotic situations without concern. Fourteen is quick to spring into activities he finds enjoyable with others, often recording them with his camera. He is also determined and perseverant, continuously practicing his skateboarding abilities until perfected.

However, despite typically lacking concern for his own recklessness, Fourteen often looks out for his friends, showing genuine compassion and kindness while ensuring their safety. He is shown to also respond with worry and concern for severe problems, indicating a greater sense of maturity. He also quickly adapts to various situations, though he is quicker to lose confidence and act more irrationally when separated from others.

Fourteen uses skater lingo and terms, utilizing words such as "gnarly" and referring to others as "dude" or "bro". He also refers to himself as "Extreme Fourteen".

As double Seven, Fourteen often provides emphasis on being double lucky, splitting into two Sevens frequently. Despite his lucky advantage, Fourteen does not use his abilities to act arrogantly, but instead uses his luck to ensure his safety when performing tricks. 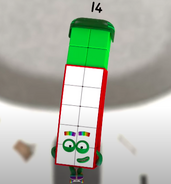 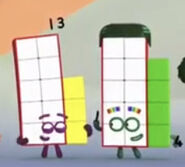