The Big One (compound)
Square on the Moon (figured-out)

She is a 7 by 7 square made by 40 green blocks and 9 gray blocks. She first appeared in The Big One as a compound, and in More To Explore as a drawing in the square temple, and finally made her official debut in Square on the Moon.

Forty-Nine has 40 light green blocks and 9 gray blocks. Her limbs and facial features are dark green. She has 7 hair clusters above her head in the color of the rainbow, each with 7 strands of hair, which disappear when she is not in her square arrangement. 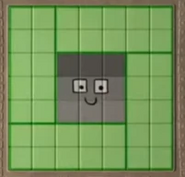 49 as a drawing as seen in More To Explore. 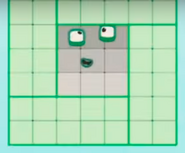 49 in the group shot

That's how 49 invented the Square Rainbow 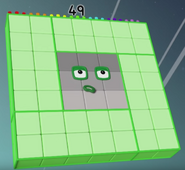