Numberblocks Wiki
Register
Don't have an account?
Sign In
in: Spoiler Alert!, Numberblocks Characters, Multiple Of 9 Numberblocks,
and 11 more

Forty-Five or 45 is a Numberblock made of 45 blocks.

BrodyTheRedflower's Forty-Five is a Step Squad who hates Rectangles.

UQQHUVs Forty-Five likes cutting things in eighths, because an eighth of a circle produces a 45 degree angle. She's also the 9th triangle... 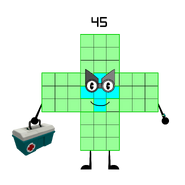