This page is about the episode. For the characters, see Fluffies (characters).

Eight is the biggest Numberblock in this episode.

One and Two see Three juggling and counting three Fluffies. Three then gets tickled.

Four counts four Fluffies arranged in a square. He gets tickled as well.

Five counts five Fluffies on a giant wooden hand and gets tickled, too!

Six rolls a dice and counts six Fluffies and gets tickled, too!

The four Sevens feel so lucky. Things yet become worse when they find out the fluffies are stuck to them. Eight appears tickling the Fluffies away. The four sevens change back to 1, 2, 3, 4, 5 and 6 in the mix.

Numberblocks, beware! It's a tickling Fluffy!

One, Two, and Three being tickled by Fluffies

Four counting 4 fluffies arranged in a square/“Count Them? Okay!”

Six And The Others Being Tickled By Fluffies 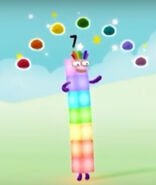 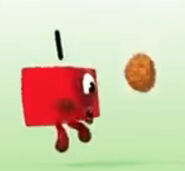 One discovers a Fluffy 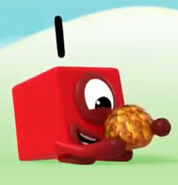 One holding a Fluffy 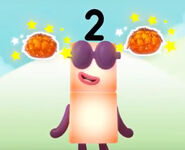 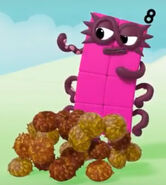 Retrieved from "https://numberblocks.fandom.com/wiki/Fluffies_(episode)?oldid=150942"
Community content is available under CC-BY-SA unless otherwise noted.