Numberblocks Wiki
Register
Don't have an account?
Sign In
Advertisement
in: Contains an Episode Top Navigation Box, Partially Protected, Has the same name with something else,
and 3 more

Flatland is an episode of Numberblocks.

Four takes a visit to Flatland, where all the flat shapes live, and he becomes a real square! Learn about shapes with numbers 1-10.

Squarey discovers a red stick. Four plays fetch with her, but the stick ends up flat on a wall. Squarey jumps in the wall and gets flat. When Four discovers it, he enters it and becomes a real square. Four wonders where he is, since he has a feeling they're not in Numberland anymore.

Squarey wanders off. Four follows her to where he sees four lines. Four sees they're at first making a Square, but they instead stretch out, and make a Rectangle Four. Rectangle shows Square Four other Fours shaped in different Quadrilaterals. They call out their names: Rectangle, Rhombus, Trapezium, Kite, Dart, Parallelogram, and Square.

Squarey wants to go home. Eight, in the shape of an Octagon, appears. Octagon makes a Flying Basket. Three Lines appear, one of them making One, in the shape of a Circle. They make a balloon. On the way home, they pass by Nine the Nonagon and Ten the Decagon. Octagon says goodbye before he returns Four and Squarey to Numberland.

Four lands in a picnic with the other Numberblocks. He tells them about his time in Flatland where he was a real square and claims to be relieved to be Four again, and the Numberblocks cheer for him.

"Prototype 6-10 as Flatland Shapes" by Punchcar63

"Two as a Digon" by PBS66Wikia

"12 Dodecagon and Star" by JamilChong 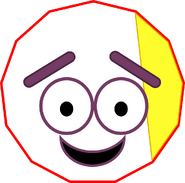 "Thirteen as a Tridecagon" by 22rho2 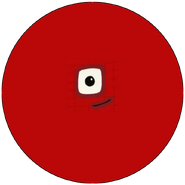