5 first appears in an episode with the same name.

She is voiced by Beth Chalmers.

5 is made up of 5 cyan blocks. She wears a big navy (dark blue) glove on her left hand she got from her reflection in the magic mirror as a permanent change (as shown in her episode), and her right eye is a star. Her eyes are dark blue, so are her arms and legs. She shares a fashion similar to 10.

Five is a lively, talented rockstar! She's most often playing on her guitar, but she can sing as well. She's a fan of stars, a big fan of rock music, and an even bigger fan of giving out high-fives with her big high-five glove. Often, she proclaims that she "feels alive".

She's generally a selfless and helpful friend. She helped all her friends solve their puzzles in The Treasure of Hexagon Island, even when it seemed to have costed her her own chance at grabbing a treasure key. When she's the biggest number around, she often takes up a guiding role over smaller Numberblocks. This can be seen in episodes like Blockzilla, where numbers 1-4 came to her for help when they were afraid of Blockzilla.

She can be very sensible, but she has her absent-minded and silly moments, too. For no real reason, two Fives screamed "Five and another Five" in the episode Five and Friends. In Holes, she wondered where Five was, and took a good few seconds to realize she was Five. 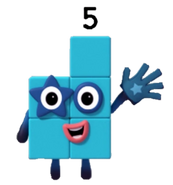 "Three, don't you know how to count?"

"What is that silly sucking sound?"

Five in "Just Add One" 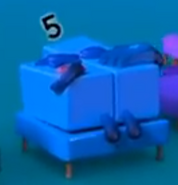 Five sleeping in "Now We Are Six To Ten" 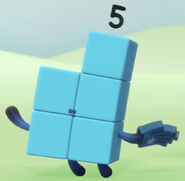