Fifteen, or 15, is a Numberblock made of 15 blocks. She is voiced by Teresa Gallagher.

She is a Step Squad agent who secretly travels around Numberland completing missions.

Fifteen is made of 10 white blocks with red borders and 5 cyan blocks. Her eyes and limbs are navy, while her lips are pink. As a reference to her status as a Step Squad, Fifteen wears a dark blue mask in the shape of five steps. She also wears a white boot with red borders on her left leg, and a sky blue boot on her right.

Her status as a Step Squad agent is derived from the number 15 being considered a triangular number-- the series of a continued summation of natural numbers.

As the first introduced Step Squad, Fifteen takes her role as a secret agent seriously. She holds her status to a very prideful degree, assuming the role of leadership frequently. Much of her mentality is straightforward and direct, revolving around completing missions in even casual scenarios. She performs her role both elegantly and gracefully, slinking around Numberland and concealing her presence. She assists other Numberblocks with her team, composed of One, Two, Three, Four, and Five with bizarre and extravagant plans. Despite her grace, Fifteen herself also mirrors this impulsive behavior, often acting smugly above others and inducing other reckless and drawn-out solutions.

Fifteen is also shown to operate independently, usually keeping her team to herself and jumping directly into action rather than informing others first. Despite her reputation as a respectful leader, Fifteen's headstrong attitude has been shown to negatively impact others, while her adjustment to recklessness prevents her from interfering with other negative situations. Still, Fifteen is often viewed to a higher, respectable degree by even other Numberblocks and is willing to jump into action quickly. 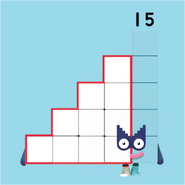 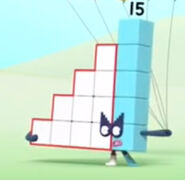 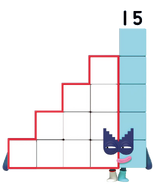 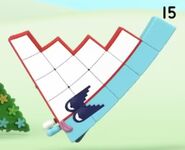 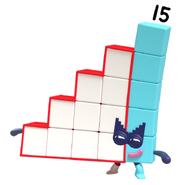