Unknown
Fair is an episode of Series 3.

It's O's birthday, and R has gotten him a present, but she isn't sure what it is. She sticks with A and I, forming trigraph AIR. F flies by.

A funfair appears. O starts at the ferris wheel, but doesn't find anything to sit on.

O sits in and the ride goes. P pops in.

O splits in two as the ride continues. Next he comes to the helterskelter. After a few times going up and down, he gets dizzy. Trigraph URE makes sure he gets better.

In the first mirror, O's reflection is big.

O's reflection grows bigger. He goes to the second mirror.

O's reflection in the second mirror is thin,

O's reflection grows thinner. O goes to the third mirror. A drops in between E and R.

It's B and X singing Happy Birthday.

B and X come near singing Happy Birthday to O.

A box appears. O opens it and finds an inanimate miniature verison of him the springs out like a jack-in-a-box.

Welcome to the funfair 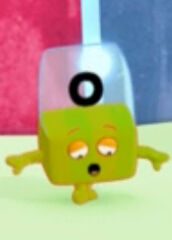 O's birthday box
Add a photo to this gallery

Retrieved from "https://numberblocks.fandom.com/wiki/Fair?oldid=163386"
Community content is available under CC-BY-SA unless otherwise noted.