Numberblocks Wiki
Register
Don't have an account?
Sign In
Advertisement
in: Contains an Episode Top Navigation Box, Episodes with songs, Has the same name with something else,
and 6 more

Eleven is an episode of Numberblocks.

The Numberblocks make a new friend, football fan Eleven, who gets them trained for the big match.

Ten and One greet each other and ask each other what they should play. While they start thinking, a ball bumps One onto Ten, forming a Numberblock one more than ten. He separates into Ten and One, both asking who that was until they realize it was... a new Numberblock!

Eleven appears! Eleven goes to the magic mirror, creating another Eleven, who splits into Ten and One. Eleven arranges herself shorter and when she sets her foot on the football, the ground changes into a field. Eleven kicks the ball in the air 11 times as she counts each time. Eleven sings about being 10+1, as they get trained for the football match.

At the match, Eleven realizes that the other team is missing. Eleven Numberblobs fill in. Game on! The Numberblocks kick the ball to goalie One. He tosses it to Two, who kicks it to Three, and the sequence continues up to Eleven. The ball then becomes saved by the goalie Numberblob. Passing the ball 'Blob by 'Blob, when Eleven keeps it and kicks it to the goal net. The Numberblocks cheer for victory as they sing the song's reprise.

One ten, one one

One ten, one one

'Cause we're louder than the rest 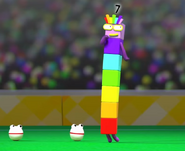 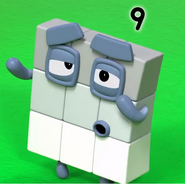 Zehn on the field and ein in goal! 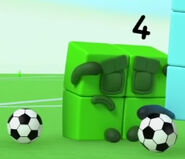 What’s even the point of football shirts if none of you guys actually wears clothes?

Seven is too tall for the camera.

Why is the eleventh Numberblob’s bobble hat white?

ONE CAUGHT THE BALL! 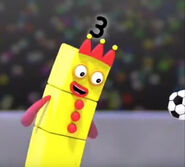 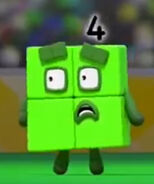 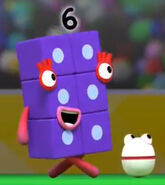 Six almost did the splits! 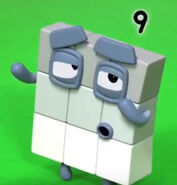 ELEVEN SPLITS INTO TEN AND ONE! IS THAT AGAINST THE RULES? 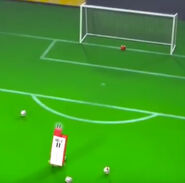 The Numberblobs agree to be the other team

Why would you even take a bow with a ball?

That was a nice header there, Three!

Four refuses to even look at the ball. He hates round things.

Five does a little jump kick...

Six is getting ready...

Seven! The ball’s there!

But you’re too busy thinking about something...

But you were watching the ball, but not when it hit you, Nine.

“Now Pass it to Eleven!

Eleven looks shocked by this move she’s about to make...

However, she leaps for the ball....

Who passes it to one of Numberblob Ten...

Seven’s too busy running around the pitch! PLAY THE GAME PROPERLY, SEVEN!

And she’s going to take a header...

And she hits it! (With a cool pose too!)

But just looks at the ball, anyway.

Well, The Numberblocks sure do look ready to celebrate.

“Eleven on our side!”