Eighteen, or 18, is a Numberblock made of 18 blocks. He is voiced by Rasmus Hardiker.

He is a hyperactive super-rectangle with the power of super speed.

Eighteen is made of 10 white blocks with red borders and 8 magenta blocks. He has thin, purple eyebrows, rectangular eyes, and limbs. He wears red "pants". His left arm features a rectangular white and pink watch referred to as an "array display", like his sister's.

Eighteen is hyperactive and a easily excitable super-rectangle who enjoys speeding from place to another place. He reflects his power of super speed in his casual behavior, often completing tasks as quickly as possible, and taking little consideration into his surroundings. He easily adapts to many situations with his energetic personality, often jumping head-first into reckless issues without expressing concern or hesitation-- instead viewing distress as fun and desirable. He is also often upbeat and cheerful, encouraging his friends frequently and attempting to include others in his super speed activities, even occasionally instructing and guiding others. His leadership abilities is further explored as he is quick to jump to solutions, making quick work of his observations despite his normally impulsive behavior. He is also very dramatic as his speech is also often influenced by his behavior, talking in various exaggerated tones rapidly.

However, Eighteen is also prone to be so impatient, unable to handle waiting times or being excluded out of activities. He is also susceptible to speaking and acting impulsively, leading to him unintentionally speeding over others or landing into greater problems. He also demonstrates a short attention span, favoring his impulses over rational thought, heavily contrasting his sister. Eighteen is also shown to be greatly attached to activities that excite him, discarding previous desires in favor of his new interest.

Eighteen has the natural ability of super speed, often amusing himself by speeding around on his rays. His speed is shown to reach extreme levels, demonstrated by his capability of orbiting the planet multiple times in mere seconds. He frequently switches arrangements while speeding, increasing his speed based on the length of his blocks. Eighteen, however, does not appear to have full control of his abilities, as he is shown to be unable to slow his speed down appropriately and is prone to dizziness and exhaustion. 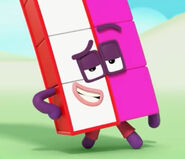 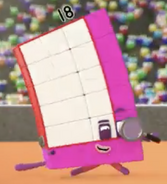