Eight, or 8, is a character who appeared in Numberblocks. He is well known for his alter-ego, Octoblock.

8 first appears in the episode with the same name.

8 is the Numberblock made up of 8 magenta blocks, with 8 octopus-like limbs and a purple infinity symbol-shaped mask with 8 points, 4 on each side. The points are apparently "eyelashes" (confirmed in the Numberblocks Crafts video on how to make Eight out of Playdoh) even though he is male.

Starting at Season 8's "Now in 3D", whenever Eight is a cube, he gains a purple cube symbol above his eyes.

He is an 8 with green tentacles and a green mask. He has small pupils and big teeth. As a cube, he has a green cube symbol above his eyes. He has a high-pitched voice and has a very naughty personality. In "Octoblock to the Rescue!", Octoblock and Octonaughty come face to face for the first time after 4 Terrible Twos create Octonaughty. However, after 4 more Octoblocks help overpower Octonaughty, the naughty Numberblock attempts an escape route, but accidentally falls into a custard pie. In "Now in 3D", Octonaughty returns and uses a "Dimentionator" to turn into a cube and use his powers to turn several other Numberblocks into 3D shapes. Twenty-Seven manages to defeat Octonaughty with the help of her factor groups, as well as Octoblock and his 2 Fours. After Octonaughty attempts to become a cube again, the machine malfunctions, turns him flat, and then blasts the villain away, who vows to catch Octoblock next time.

Pre-Octoblock waiting for a bus

Octoblock sleeping in "Now We Are Six To Ten" 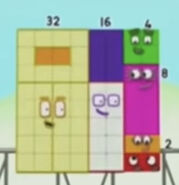 Oh, all the shapes Octoblock could make! Can you find the Wrench? (Hint: it’s upside-down)