D is the fourth letter in the Alphablocks gang. He is B's older brother and plays the drums.

D is voiced by David Holt.

D is dark blue and his star is a darker blue. He wears sunglasses.

D is a purple cube with a light green star on his left eye. His eyebrows nearly always look angry every time he appears. 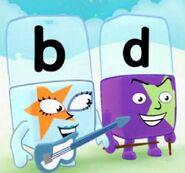 D with his sister, B.