Cowboy is the 91st episode of Alphablocks.

O duplicates himself into four. When U, W, Y, and I watch, the O's fall over, sticking them together into vowel digraphs (OU, OW, OY, OI). When OU and OI leave, T comes up and holds hands with OY.

A toy appears. T leaves. B joins in.

A boy appears. B asks what a boy is. The boy says he is one. C appears.

The boy turns into a cowboy and a ranch, named the Thousand Cow Ranch, appears. The boy sets off to round up a cow. Passing OU, he asks them if he can help. The boy offers them a hat. While looking for a cow, they pass D and L.

The cow belts out a loud MOO!, startling L, OU, D, and the cowboy. They chase the cow, while L walks away. N, who is playing the harmonica, joins in. Then they hear a sound like a rattlesnake. It's actually S shaking a rattle.

They hear a moo. But the sound actually comes from a moo box. While continuing the search, F flies in.

They found a real cow! The cowboy lassoes it in. They need 999 more to go. But where can they be? Deputy TH marches in, S flies in, and A drops in.

Nine hundred and ninety-nine more cows appear, totalling up to a thousand cows! And they're all glad to be here in the Thousand Cow Ranch. Everyone tosses their hats and shouts "YEE-HAAAA!"

And so ends the Alphablocks TV series. 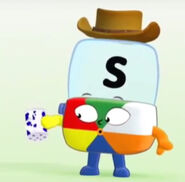 “Nine hundred and ninety-nine to go.” 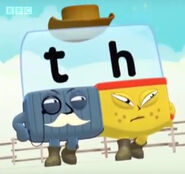 That’s more cows than sheep Six could count.
Add a photo to this gallery

Retrieved from "https://numberblocks.fandom.com/wiki/Cowboy?oldid=158043"
Community content is available under CC-BY-SA unless otherwise noted.