Numberblocks Wiki
Register
Don't have an account?
Sign In
Advertisement
in: Alphablocks Episodes, Episodes with “UCHEWS”, Gadsby episodes,
and 2 more

C creates cracks. A drops in and T comes up.

A Cat appears. Then A sneezes. A mentions that she's allergic to cats. A sneezes again. O comes up.

A bowl filled with a cod appears. However this doesn't really stall the cat as A sneezes to N. A tries to ask N for help, but N declines. T, P, and C comes up.

A dog appears. O pets it, but starts sneezing due to his allergy to dogs.

A landing. Fell from hammerspace.

A gets hit by an acorn. 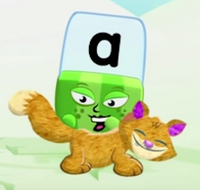 A bounces off the ground. 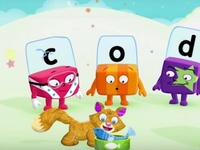 Congrats! You somehow managed to keep the cat away! Or did you?