C is the third letter of the Alphablock gang. She is the younger sister of K.

C is voiced by Teresa Gallagher in the UK.

She is a pinkish-red Alphablock with white stripes on either side and blue stars on them, wears gloves, goggles, and has a crack on the right side of her head.

She had a redesign, now her stars are circles.

C is the resident daredevil girl and loves to perform stunts, causing cracks to break through the ground as if she were creating quakes. Her best friends are A and B both of them are girls.

C with her brother, K. 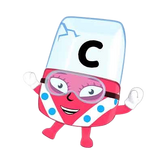 C as seen in the specials. Notice the circles on her body? 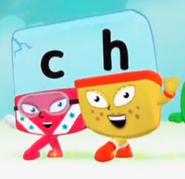