Numberblocks Wiki
Register
Don't have an account?
Sign In
Advertisement
in: Partially Protected, Alphablocks Episodes, Episodes with “UCHEWS”,
and 3 more

Box is the nineteenth Season 2 episode of Alphablocks.

Alphablocks, a dressing-up box - it must be show time! B, O, and X discover a dressing-up box that is filled with everything they need to put on a performance of Sleeping Beauty, except for something to sleep on.

O and X are playing noughts-and-crosses (tic-tac-toe), and X wins. B wants to join in.

A box appears. X opens it and inside are props. P pops in and decides to put on a play.

At the Alphablocks Players, the play is "Sleeping Beauty". P is the narrator and L plays as a princess. I is supposed to be a witch, but doesn't have a costume.

I is now a witch. She pulls a trick on L with a wheel. L pricks her finger and starts to fall asleep, but she needs something to sleep on. Some Alphablocks come to help.

This episode has fun with a host of letters and the words box, hag, red, ted and bed. 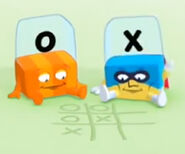 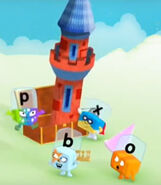 X pulls out a tower from the box for some reason

Let’s put on a play!

Sleeping Beauty by the Alphablocks.

Once Upon A Time, there was a little red block that fell from the- oops, wrong episode.

I mean, there was a princess named L.

But not everyone loves L...

I makes her entrance!

I as a hag

I casts a spell on the wheel thing 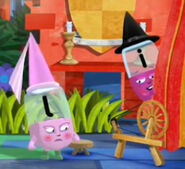 Curiosity puts the L to sleep.

L needs something to lie on.

THE OPPOSITE OF GREEN!

ONE OF THE WORDS SPELLED OUT IN LIPS!

Somebody touched their porridge! The meme lied to us! 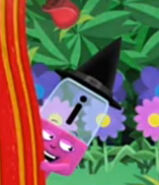 P and X discussing why X should be the prince

An X on the cheek wakes L up.

And they all lived happily ever after like all the other stories! No cliffhanger is safe!