Book is a Season 3 episode.

It's nighttime, but B has trouble falling asleep and wishes to hear a bedtime story. O and K come to help. O doubles himself up.

A huge book appears. When OO opens it, some letters fall out. B and K can use the letters to change into another Alphablock. The book, which talks, automatically turns to the first page, where it introduces a girl named "Little Red Riding ____". The last word of every page has gone missing, and it's up to the Alphablocks to put them back!

It doesn't work. B changed into H.

The word "Hood" appears on the page. On the next page, it shows that she is always...

The book somehow agrees with that word and turns to the next page, where it shows that she is walking to her grandmother's house on the other side of the deep, dark...

The book reminds them that "wood" might be better, but the Alphablocks decide to write their own version. On the next page, a sort of animal jumps out from behind a tree.

It's supposed to be a wolf, but it turns out to be a dog, which the book calls a "woof", who is very big and very...

So the Big Good Woof keeps Little Red Riding Hood safe as they walk to her grandmother's...

Inside Little Red's Grandma's boot-shaped house, the Woof is very hungry, so he becomes a...

The Big Good Woof cooks up lots of delicious...

The three of them eat together as the story ends. Then the book sees B, OO, and K snoozing.

The sound a chicken makes

Letters flying off of the book 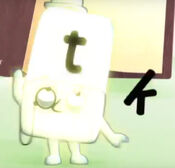 You chose wisely, my friends. 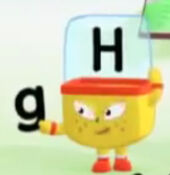 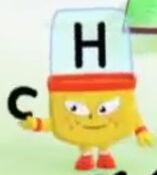 One day, Little Red Riding Hood decided to visit her grandmother, who lived on the other side of a deep, dark...

There was an old woman who lived in a shoe. She had so many children that she did not know what to do.

Retrieved from "https://numberblocks.fandom.com/wiki/Book?oldid=177342"
Community content is available under CC-BY-SA unless otherwise noted.