U is upside-down, next to an upside-down tree, and the whole of Alphaland is blue. How did that happen?

U is upside-down, next to an upside-down tree, and the whole of Alphaland is blue. I wonders who did this? U says it wasn't him. I doesn't believe him. Then E and W stick together and say U and OO, causing I to claim that U did it!

Why would I tell a lie? Let me explain in song. Just hear my story and you will know why. I haven't done anything wrong.

U changed from blue into four different colors! When they held hands, a mighty oak tree...

They tried again, but then a great wind...

It got worse, whoosh and away it...

Then the tree landed in a different spot, along with U. Next, E stuck with U, and they said U and OO too. That is completely...

The whole of Alphaland turned blue. Then they got stuck by...

U played a LUTE, E played a FLUTE, and he saved him with a...

A prune appeared. Then M and L came.

A mule kicked the tree, along with U, and they landed upside down, like in the beginning of the episode. Back in the present, I then believes U and leaves.

Let him explain in SONG. 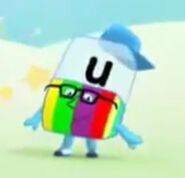 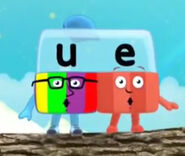 I didn’t mean it literally...

And that’s what happened.

All Long U sounds (except for OO)
Alphablocks episodes
Community content is available under CC-BY-SA unless otherwise noted.
Advertisement