This episode is the first episode of the Alphablocks series. The letters from A to Z are sounded out.

ouch? A is for apple and alphabet!

B in the band with a big, blue bass!

C makes cracks all over the place!

D on drums, drumming all day. 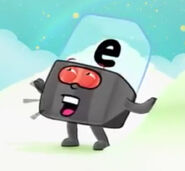 F has fun, flying in the air!

H huffs & puffs, and hurries along!

I is so important, here my song!

K kicks a ball, it lands with a bump!

M is munching, my oh my!

P pop pop pops all around!

Q is quiet without U!

S starts sagging, then she soars!

U says unfair, unlucky me!

W weeps and water comes out!

X to the rescue with his x-ray!

Z is snoring in his bed.

Z wakes up.
Add a photo to this gallery

Retrieved from "https://numberblocks.fandom.com/wiki/Alphablocks_(episode)?oldid=87469"
Community content is available under CC-BY-SA unless otherwise noted.