A is a character in Alphablocks.

A is voiced by Lizzie Waterworth.

A is a green striped Alphablock with freckles on both her cheeks and a bandage on the left one. Apples continually fall on her head; though this is usually harmless, it once caused A to forget her own name.

A is fairly accident-prone, likely to fall from nowhere or have objects fall on her. Even A's sneezes are strong enough to blow nearby things a short distance.

Despite her clumsiness, A enjoys making friends and helping other Alphablocks; she's closest to B and C, in more ways than one. She has a good deal of musical talent, singing in both Alphaland's main rock band and an all-vowel choir.

In Prank, A revealed her taste for practical jokes after she discovered a red clown nose and played jokes on all of the other Alphablocks. 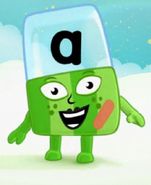 A in the pilot episode "Alphablocks"

Capital A, as seen in the Alphablocks logo

Trigraph AIR, as seen in... something.